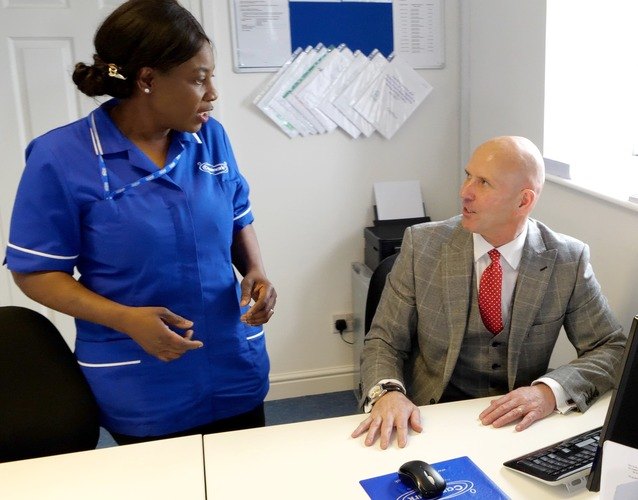 On Friday the 25th July Angela Tucker speaks to BBC Cambridge Radio regarding how to help look after the elderly and vulnerable during extreme hot weather
Summer Health Guide
Check-in on the elderly this summer.
In July 2018, the UK was gripped by one of the hottest summers since records began, with many parts of the country reporting temperatures of close to 35C. Whilst the Met Office are fairly certain another blistering heatwave is unlikely this summer, they have already warned that we are to expect temperatures that are higher than usual during June, July and August - in many cases beating the temperatures that can be found in our favourite holiday destinations in Spain and Greece.Warmer weather is often celebrated by the masses, as we dust off the BBQs and stock up the freezer – but spare a thought for your elderly loved ones or neighbours. High temperatures and strong rays of sunshine can cause multiple health implications, particularly for older people. A slow incline in temperature can often catch them unawares, so the best way to prepare is to do just that – prepare.1.Check inAs temperatures rise, us Brits can often be found basking in the sunshine, relaxing with friends and making the most of the longer, lighter evenings. Older people often find it harder to take part in these sorts of events as the hotter weather, higher pollen count and an increase in humidity has an adverse effect on pre-existing health complaints. As we get older, our bodies become less able to regulate temperature as people over 65 don’t sweat as much as younger adults – unfortunately, this is one of the body’s most important heat-regulation mechanisms.Checking in on someone during spells of warmer weather, if only for a few minutes a day, offers an opportunity to ensure that person is taking good care of themselves and regulating their own body temperate effectively. It’s also a good idea to check on their general wellbeing – making sure they’re managing to keep their home cool and that they’re in good spirits. Older people living alone might be more aware that neighbours are hosting BBQs and parties in the great outdoors, which could increase feelings of loneliness in those who aren’t able to see friends and family very often.2.Check the riskAlthough older people are undeniably at a higher risk of becoming ill during the summer months in a general sense, some people are at an even higher risk than others. People who live with the following pre-existing health complaints or conditions face more of a risk than other, healthier older people:· Heart, lung or kidney disease· High blood pressure or other conditions that require a strict diet· Being overweight or underweight· Being dependent on alcohol.3.Check the signsWhen checking in with a loved one or neighbour, it’s important to recognise the signs they could be suffering from a heat-related illness. These could be any one – or combination of – heat cramps, heat exhaustion or heat stroke. These conditions are usually caused by prolonged exposure to the sun and symptoms can present themselves in the following ways:· Nausea or faintness· Exhaustion· Weak or rapid pulse· Dizziness· Muscle cramps· Excessive sweating.Any of the above can cause hyperthermia – not to be confused with hypothermia – which happens when a person’s body temperate is elevated due to failed thermoregulation. In short, the individual’s body produces or absorbs more heat than it releases. In order to treat or alleviate the symptoms of hyperthermia, you must encourage the person to rest in a cool, dark room and drink plenty of fluids.Preparation really is key, so by reading this guide, you’re well equipped to offer a helping hand and ensure your elderly friends and relatives are making the most of the warmer weather too. At Caremark, we begin making provisions for the summer months when the long-term weather forecasts are released. Whilst they regularly change, it’s crucial we plan for all eventualities. I often think planning for the most extreme scenario is the only way to prepare, we all want to enjoy the summer
Share this article:
Please tick the box before subscribing
Subscribe for News & Updates
Thank you for subscribing
TOP OF PAGE