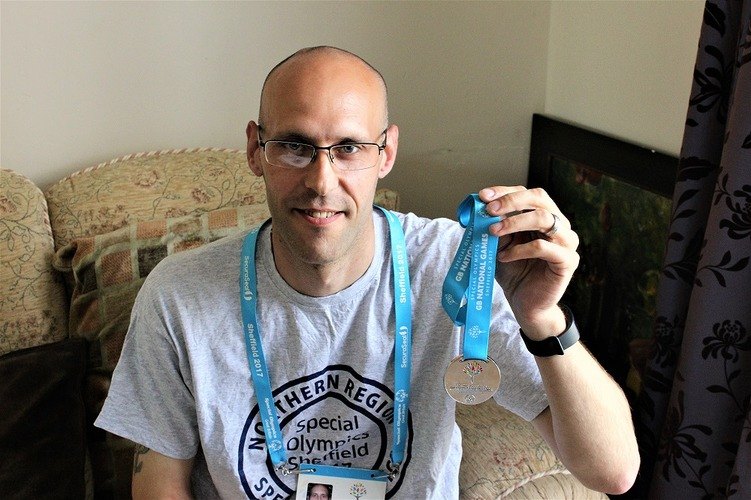 A carer from Caremark (Redcar and Cleveland) has represented his region in the Special Olympics GB National Games.

Anthony Agar was one of the members of the Northern Region basketball team who competed at the Games in Sheffield in August.
Despite never playing before, he played well and contributed to his team winning a silver medal, being beaten by Scotland West in the final.
Anthony, who lives with his wife Jenny in Normanby Road, South Bank, near Middlesbrough, said: “I have played a lot of football but never basketball, however I know the Northern Region team coach and he asked me to come for a trial.
“I am 6ft 3ins, which helps in basketball, and I picked the game up quickly and we trained for 2 hours every fortnight in the run-up to the Games.
“The practice helped and I even scored a couple of free throws in the tournament, which was fantastic.”
Anthony, who works as a carer for Caremark (Redcar and Cleveland) had to play five, 16-minute games a day to reach the final.
He added: “The team from Scotland who beat us had practised nine hours each week, so they were well prepared and were very deserving winners.
“All in all, it was a great experience and not many people can say they have won a silver medal in the Special Olympics, so I am very proud.”
Anthony, who has dyslexia, is now planning to try out for the Team GB team who will compete in the Special Olympics 2019 World Summer Games in Abu Dhabi.
Michelle Jackson, Care Manager at Caremark (Redcar and Cleveland), said: “We are very proud of what Anthony has achieved. He is a fantastic employee and deserves his success.”
Share this article:
Please tick the box before subscribing
Subscribe for News & Updates
Thank you for subscribing
TOP OF PAGE