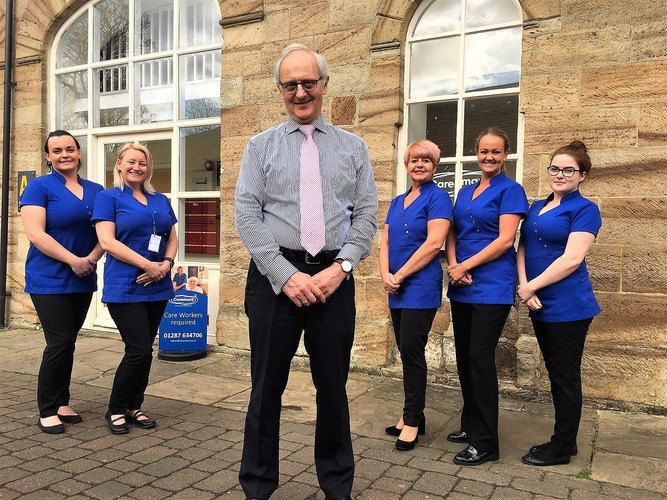 Caremark Redcar and Cleveland has celebrated its 10th anniversary by reaching another major milestone.

We now provide 5,000 hours of care per week to people across Guisborough, Middlesbrough, East Cleveland and Redcar.
This landmark was passed as a result of gaining new work from Redcar and Cleveland Borough Council and general organic growth in the past few months.
It coincides with the company’s 10th anniversary, having been set up by Managing Director CharlesFolkes in November 2008.
And it caps off a great 12 months for Caremark (Redcar and Cleveland) having, at the end of 2017, become one of only 2% of home care providers in the UK to receive an outstanding rating from its regulator the Care Quality Commission.
This was followed by the company being named as one of the top 10 home care providers in the North East, based on reviews from clients and their families, and winning the Caremark Franchise of the Year Award, beating off competition from 108 other franchises across the UK and Ireland.
Mr Folkes said: “When I established the business, we were providing just a few hundred hours of care per week, so to now be at 5,000 hours ten years later is beyond all my original expectations.
“It’s testament to the dedication of our carers who work in day in, day out, in all weather making a difference and improving the quality of the lives of the people we support, ensuring they can remain in their own homes for as long as possible.
“They are supported by a fantastic head office team who coordinate the care and ensure the carers have everything they need to meet the needs of the people they look after.
“It’s been an amazing decade of growth, but we will not be resting on our laurels; we want to grow further whilst continuously seeking improvement and ensuring the highest possible quality of care.”
Share this article:
Please tick the box before subscribing
Subscribe for News & Updates
Thank you for subscribing
TOP OF PAGE