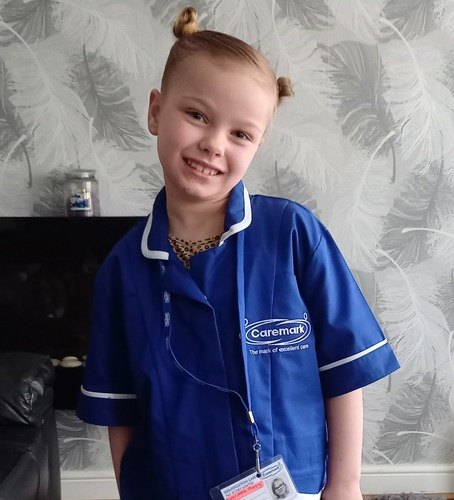 Is it a bird? is it a plane? no, it’s eight-year-old Poppy from Cleveland, whose mum Gemma Dixon works for in-home care company Caremark (Redcar and Cleveland). Poppy was asked to come to school in a superhero costume to mark Red Nose Day last month along with the rest of the classmates from her local school.

With most children turning up to their school day wearing a character outfit from the Marvel Cinematic Universe or a DC character such as Superman or Wonder Woman, Poppy decided she wanted to wear the same uniform that her mum and other carers do, so a special one was made for her complete with her own identification badge to celebrate what a superhero her Mum is.

Her unique outfit for the day went down a storm with teachers, children, and parents at Westgarth Primary School in Marske, with many remarking on how fantastic this was.

Gemma, who started as a Care & Support Worker at Caremark (Redcar & Cleveland) in 2014 and is now the company’s Medication Assessor, said: “Poppy and I talked about the superheroes she could dress up as and we decided to do something different and pay tribute to carers, who have been the unsung heroes of the past 12 months working on the frontline during the Covid-19 pandemic.”

Gemma added: “She was a little nervous because she knew her costume would be very different, but everybody thought it was brilliant and she came home buzzing.” The went onto say: “She has already told me she wants to become a carer when she is older and join ‘Team Blue’ as we call ourselves at Caremark.”

Michelle Jackson, Managing Director at Caremark (Redcar and Cleveland) said: “We’re touched that Poppy chose us to represent us at superhero day and we’re definitely keeping a job here for her at Caremark.”

Not all superheroes wear capes, but the best ones look best in blue! If you too would like to join the ranks of these heroes in blue, then click here to find out more about a career with Caremark.