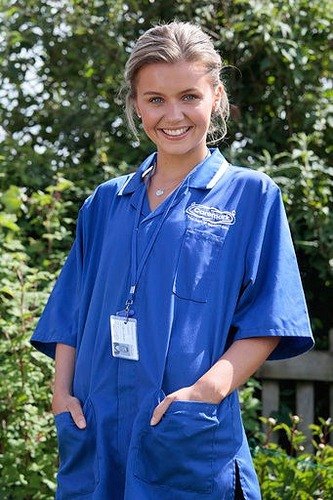 Caremark (Worcester) Care and Support Worker swaps sash and football boots for PPE to help the vulnerable in her community.

Erin Smith, 18 was desperate to join the fight against Coronavirus after the country went into lockdown, so joined Caremark (Worcester) as a Care and Support Worker.

Erin (pictured) has played football since she was four and has been part of the England Colleges squad at an under 18 level, she has played for West Bromwich Albion and Coventry United before she had to take time off to recover from an injury. The defender was then forced to temporarily hang up her boots when all professional football was suspended due to the coronavirus outbreak.

Erin admitted parents Mo, 54, and Tony, 50, who she shares a home with, were worried initially about her working on the frontline. “My friends said I was crazy when I signed up,'” she said. “Mum and dad were worried because they didn't want me catching anything, but we don't have anyone vulnerable in our family.”

Speaking of her Care and Support work at Caremark (Worcester) she said her PPE is a bit different to her usual pageant attire as she wears a face mask, gloves, apron, and face shield during her shifts. “Some think the PPE is funny and over the top but obviously you can't risk giving the clients anything,” she explained.

Erin has also entered the Miss England contest, Erin said “The only lady I told about the competition really encourages me. She thinks it's amazing.” Erin submitted videos and images of herself to the Miss England YouTube channel cat walking in her garden and showing off her football skills to earn her place in the beauty contest.

The Miss England Midlands semi-final was due to take place last month at Resorts World in Birmingham, but due to social distancing restrictions the contest is being held virtually instead, with the public and judges picking winners who will go through to the final. Organisers are currently unsure whether the grand final, due to be held on 31st July will go ahead physically as this may also be held over the internet too.

Erin said: “The reason I entered the competition is because I thought it would build my confidence, but I understand why we can't do it on stage with an audience.

Doing it virtually is a bit different, but I do not mind. I cannot wait to get back into football, though. My dad loves that I'm into it and supports me so much, but I've had to do a lot of online fitness classes instead to keep fit.”

Erin, who lost her other part-time job at a coffee shop when the pandemic became more serious, spoke of how the hardest part of her new career is seeing how lonely the elderly she cares for are.

She commented: 'The most difficult thing is not being able to spend a lot of time with them, especially if one of them is having a bad day. “I set up a zoom call on my laptop for one lady so she could see her grandson, and she cried.”

To find out more about how you can become a Care & Support Worker in your local community, then go to www.caremark.co.uk/care-jobs to find out more,